Please fill the below Details 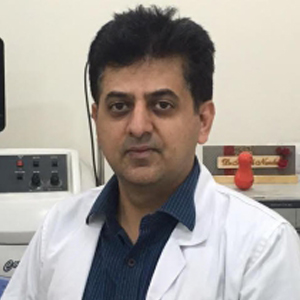 Dr. Harish Nanda, Consulting Otorhinolarygologist is known for his excellent rapport with his patients. He did his graduation & post graduation from Dayanand Medical College and Hospital Ludhiana in 1998.Since then he has worked under some of the top specialists in his field, which include fellowships under Dr. Heine Stamburger from Austria .He did his senior residency at Batra Cancer & Research Institute Delhi and Oswal Hospital Ludhiana and worked in Guru Nanak Mission Charitable Hospital Jalandhar for three years.

With excellent results in all his surgeries especially Laser/ Coablation and Microdebrider assisted FESS and Adenotonsillectomies and Reverse Stapedotomy ,he has garnered a reputation for being one of the best ENT Surgeons in Northern India.He has also attended a number of National & International conferences and also conducted live surgical workshops along with the best surgeons in the field of ENT at Kataria Eye & ENT Hospital Pvt. Ltd.

The Hospital has had the pleasure of having him for more than 20 years. He has been the driving force behind the total renovation and technical advancement of the hospital which is functioning since 1977.